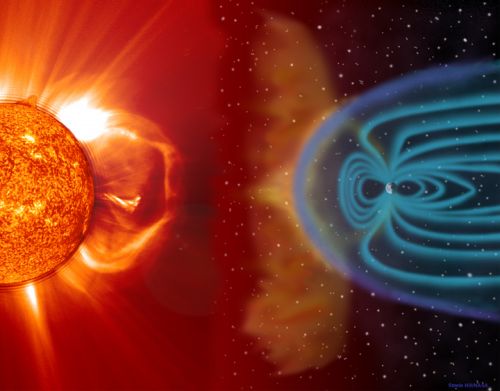 What is cosmic radiation?

Cosmic radiation consists of energetic charged particles, such as protons and Helium ions, moving through space. They originate from events beyond our solar system and from the sun. When these particles enter the Earth’s atmosphere they collide with, and disrupt, atoms in our atmosphere, producing secondary, less intense, radiation. By the time cosmic radiation reaches the ground its intensity has been considerably reduced.

How important is cosmic radiation compared to other sources of radiation?

On the ground, cosmic radiation makes up on average about 17% of the natural background radiation to which we are all exposed. The rest consists of radon gas (50%), radiation from minerals in the soil (20%), and radiation in our bodies from food and water (13%). These proportions do vary, as does the total exposure, depending on geographic location because of differences in soil composition and altitude.

What determines the intensity of cosmic radiation?

How much exposure to cosmic radiation is there while flying at commercial aircraft altitudes?

The amount of exposure to cosmic radiation while flying depends on the time spent flying, in addition to the factors mentioned above – altitude, latitude and solar activity. Solar flares contribute very little to the overall exposure from cosmic radiation.

For occasional flyers the exposure to cosmic radiation is very small. For those who fly frequently, such as aircrew and some business travelers, the annual exposure may be comparable with, or even exceed, that of radiation workers in ground-based industries.

At commercial aircraft altitudes cosmic radiation is much more intense than on the ground. Even though exposure can be a hundred times greater at these altitudes than it is on the ground, it is still fairly small. It would take about 100 one-way flights between Toronto and Vancouver to obtain the same exposure as we get in one year from other sources of natural background radiation.

What are the potential health implications attributed to cosmic radiation exposure at commercial aircraft altitudes?

The only effect that is known to be possible at this level of exposure is a very slight increase in the chance of a cancer occurring many years, even decades after the exposure.

In theory, small exposures to radiation can start off chains of events that may lead to cancer many years later. The body’s repair mechanisms are usually able to fix the damage that is done before a cancer develops. While no level of exposure to radiation can be described as safe, at the same time, no level is uniformly dangerous. The chance of a cancer occurring is generally believed to be proportional to the level of radiation exposure: the lower the exposure, the lower the risk.

It is known that the unborn child is very sensitive to the effects of radiation and other agents. This is partly because the cells are rapidly dividing and growing into specialized cells and tissues. Interference in the process of development by any agent could result in birth defects or certain illnesses such as cancer. Birth defects are not expected to result from cosmic radiation at commercial aircraft altitudes because much higher levels of radiation exposure are needed to produce birth defects.

Because of the uncertainty concerning the magnitude of the risk at low levels of exposure, radiation protection authorities have recommended that the additional exposure to an unborn child be kept to a level which is similar to the variation in natural background radiation. This would equate to about 200 hours of flying. At this level of exposure no observable health effects are expected.

What are Health Canada’s recommendations?

Pregnant women who expect to fly more than 200 hours over the course of their pregnancy should seek further information from the Radiation Protection Bureau, Health Canada on the radiation risks for unborn children.