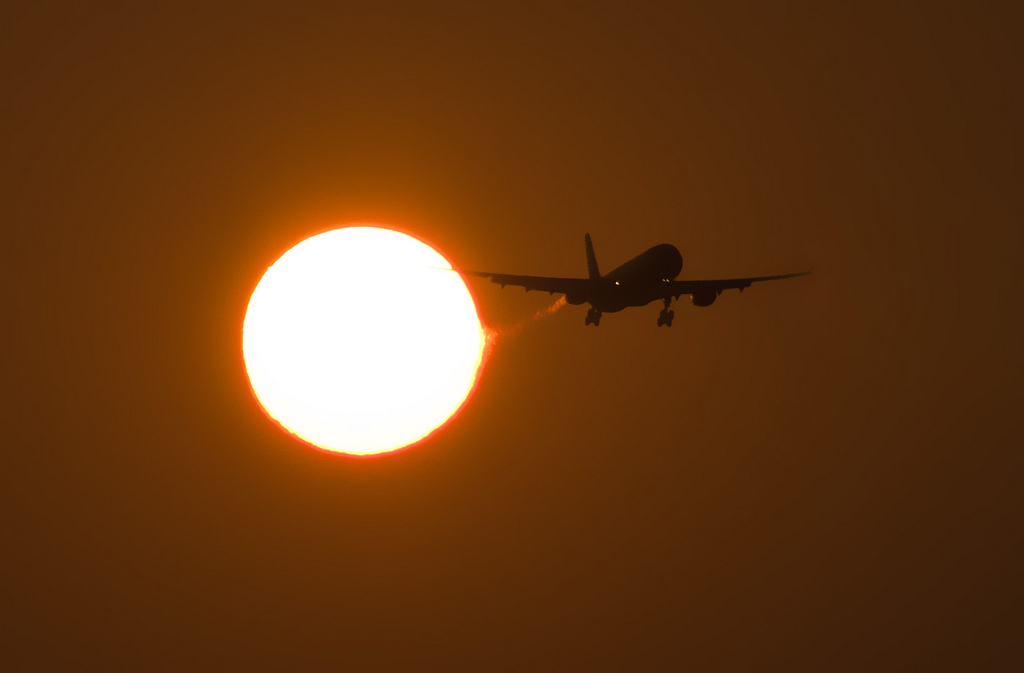 What are solar flares? Do they affect radiation dose when I fly? Can cosmic radiation during plane flights hurt me? Can radiation from solar flares hurt the fetus of a pregnant woman?

The sun produces energy by fusing hydrogen in its core. This reaction is very close to what happens in a hydrogen bomb, but on a hugely larger scale. The amount of energy produced by hydrogen fusion in the sun’s core heats the sun and drives solar activity as it makes its way to the sun’s surface and into space.

The surface of the sun is much cooler than the core, but it is still tremendously hot by our standards—about 6,000 degrees centigrade. Partly because of this high temperature, gas from the sun is continually driven off into space; we call this the solar wind. The solar wind is simply protons (the nuclei of hydrogen atoms), neutrons, electrons, and alpha particles (the nuclei of helium atoms)—the same materials the sun is made of—that travel through space at velocities of hundreds of kilometers per second, and some of this solar wind reaches the Earth as one component of cosmic radiation (the rest of cosmic radiation comes from outside the solar system and is called galactic cosmic rays, or GCRs). The Earth’s magnetic field helps to shield us from much of the sun’s radiation, funneling the electrons, protons, and alpha particle into radiation belts that surround our planet instead of letting them reach the ground. And our atmosphere provides fairly substantial shielding too against the cosmic rays that penetrate the magnetic field.

In addition to hot gas, the sun’s surface is also penetrated by magnetic fields, as is the Earth’s surface (although the Earth’s magnetic field is not nearly as strong). In places, the solar magnetic field is stronger than in others and, in some of these places, the magnetic field lines of force can become twisted, which is a way of storing energy. Think of a rubber band-driven airplane; we can hold the airplane steady while twisting a rubber band around and around. As we twist the rubber band, we are storing energy, and when we let go of the propeller, that stored energy causes the propeller to turn quickly enough to let the plane take off. In an analogous manner, the twisted solar magnetic fields store energy and, when that energy is released, it sprays huge amounts of hot gas into space. This is a solar flare.

The particles emitted during a solar flare are high-energy hydrogen and helium atoms that have had all of their electrons removed. But alpha radiation is high-energy helium nuclei and hydrogen nuclei are simply protons. Both of these are forms of radiation, as are the electrons (beta radiation) and neutrons found within the gas. In other words, a solar flare is a huge emission of radiation from the sun, and if it’s aimed at the Earth, we will experience higher levels of radiation because of this.

Even given that, the increase in radiation levels to aircraft crew and passengers is not very large. For example, during normal solar weather, one can expect to receive a radiation dose of about 71 microsieverts (about 7.1 mrem) flying from the eastern United States to Australia and about 85 microsieverts flying to Japan (the Japanese flight is farther north, where the Earth’s magnetic field is weaker). This level of radiation dose is about the same as a week’s worth of natural background radiation. Studies have not shown that this level causes any harm to those exposed.

According to the National Oceanographic and Atmospheric Administration (NOAA), radiation dose from solar flares can reach as high as 200 microsieverts per hour (20 mrem/hr) for up to a few hours at commercial aircraft altitudes. This would give a radiation dose of up to 400-600 microsieverts (40-60 mrem) during a two-to-three-hour solar flare. Although this is a higher radiation dose than is normally experienced, such solar flares are expected to occur only a few times during the 11-year solar cycle and the great majority of passengers simply won’t be in the air when one occurs. Even for those passengers who are exposed to this level of radiation, the expected effects still are not significant—this level of radiation exposure is similar to receiving an x ray and is far less than what you get in a CT scan.

So, even during large solar flares, passengers will not receive a radiation dose to be concerned about, but pregnant women worry about the effects on their children. Studies of airline flight attendants show that even those who make a career of flying do not have any demonstrated ill effects from their occupational radiation exposure, and studies of pregnant women exposed to medical radiation (as well as pregnant women exposed at Hiroshima and Nagasaki) do not show that there are dangers to the developing fetus from radiation doses far higher than what anyone will be exposed to on an airplane. In other words, a fetus simply will not receive enough radiation during flight (even during a large solar flare), even during the most sensitive times of fetal development, to cause any problems.

There is a lot of information on this matter on the Health Physics Society (HPS) Web site and this information comes from medical doctors as well as from radiation safety professionals. A Web site unrelated to the HPS with similar information is the Baby Center Web site.