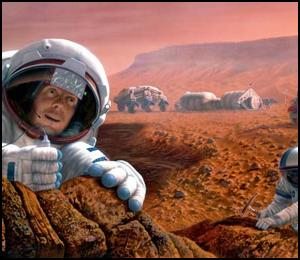 Astronauts traveling to Mars will take over 180 days to get there, spend up to 780 days on the surface, and then spend another 180 days on the return to Earth. Aside from the medical and psychological issues, one of the most significant problems is the radiation exposure and how to reduce its inevitable impact to astronaut health.

Most estimates strongly imply that returning astronauts will have exceeded their lifetime radiation dosages, with consequent increases in cancer rates.

Among the current plans for an expedition to Mars is the following scenario:

Every 26 months (780 days) a launch window opens up for Mars when the planet is nearest Earth. During three or four of these, supply rockets will be launched to arrive at Mars about 200 days later. They will land at a single predetermined location and accumulate supplies for the astronauts. When this phase is finished, a mission carrying 6 crew members will be launched for a 180-day trip to Mars. When they arrive, they will land, and assemble the first Mars colony from the supply parts and modules. They will stay on Mars until the next window opens up in 26 months, then make the return trip. Their total duration in space will be about 360 days, followed by 780 days on the planet’s surface. During the mission, they will encounter two distinct radiation environments; interplanetary space and the surface of Mars. Here is what we know about each of these, and their space weather aspects.

Mars Surface Radiation Part II. – In 2002, the results from the Odyssey MARIE experiment were revealed in a JPL press release on Friday, March 1. The research reported an estimate for the Mars surface dosages calculated from the Mars atmosphere and altitude data. The detailed surface map revealed that the annual radiation dosage due to cosmic rays is generally between 15 to 20 rem per year, but that certain low-altitude areas with thicker atmosphere above, were as low as 10 Rem per year. Since annualized dosages at the International Space Station are between 20 to 40 Rem, the Mars surface environment is a factor of 2 to 4 times lower in radiation levels. Astronauts within a sheltered living area or bulkhead would receive substantially lower radiation exposures on Mars due to the additional shielding.

Mars Surface Doses During Solar Maxim: Although the surface of Mars is shielded by a thin atmosphere (equal to about 20 grams per square cm of shielding) from direct cosmic and solar radiation exposure, there is so little of it that astronauts will have to monitor their radiation accumulation very carefully. In NASA Technical Paper 3300 published in February 1993, Lisa Simonsen and John Nealy calculated the dosages that astronauts would receive at the surface during solar maximum conditions, and with a major solar storm in progress equivalent to the August-December 1989 solar flares ( the largest seen at that time since August 1972). The solar flares deliver about 5 Rem /yr. Cosmic rays deliver about 6 Rem/yr at solar minimum and 3 Rem/year at solar maximum. For Mars stays between 374 and 677 days, they estimate total dosages from 10 to 25 Rem.

Mars Orbit: In Mars orbit, the MARIE sensor on the Odyssey Mission show that it is two to three times as ‘hot’ as a similar orbit around Earth at the altitude of the Space Station. Carl Zeitlin, the Principle Investigator for the radiation sensor, says in 2004 that if a crew were subjected to these levels during their journey to Mars and back, they would reach their maximum lifetime dose. Essentially, a trip to Mars would be the last time the astronauts would ever be allowed back into space.

Superflares Could Kill Mars Travelers: – On March 21, 2005 the magazine New Scientist reported that a study of the most powerful solar flare of the past 500 years suggests that another like it would carry enough punch to kill astronauts in a poorly shielded spacecraft. The crew of a future mission to Mars might be at risk unless their craft is made of the right materials. “Lawrence Townsend of the University of Tennessee in Knoxville and his colleagues have calculated the radiation effects of the most powerful solar flare ever recorded, based on evidence that the flare left behind in Greenland’s ice nearly 150 years ago. The event was seen by the British astronomer Richard Carrington in September 1859 (New Scientist print edition, 4 September 2004). It easily surpassed the monster eruption of March 1989, which knocked out the power grid in Quebec, Canada. They found that astronauts behind only a few centimeters of aluminum – the shielding found in the average spacecraft – would suffer a dose that could cause acute radiation sickness and possibly even death. ”

The bottom line is that the trip to Mars and back would subject travelers to significant levels of radiation, and a significant increase in cancer risk.