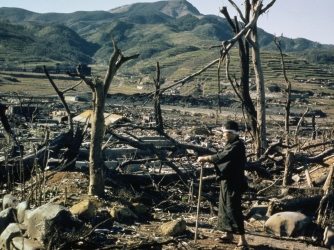 The following question was answered by an expert in the appropriate field:

Q: Many Japanese died immediately from the blast forces, heat, and fires resulting from the atomic explosions at Hiroshima and Nagasaki, and a large number died within weeks or months from radiation effects. (1) What information is available about the health and life-span of those who survived? (2) For example, how many were still alive after 50 years and how does this compare with Japan in general? (3) What about genetic effects in the children born of the survivors? (4) Is there reasonable evidence from the work with survivors to support the possibility of low radiation being less harmful than expected or even beneficial? Thanks for your expert service.

A: An excellent reference for all manner of questions regarding the A-bomb survivors is the book by William J Schull, Effects of Atomic Radiation: A Half-Century of Studies from Hiroshima and Nagasaki, Wiley-Liss, Inc., 605 Third Avenue, New York, NY 10158-0012 (1995) ; ISBN # 0-471-12524-5. This is a scholarly book and yet is written at a level that the intelligent layperson can understand. It has a wealth of historical as well as scientific information about the studies, spanning the entire time period since the bombs were dropped. Following are answers to the specific questions asked:
Much information is available; for example, in the book cited above.

No genetic effects have been detected in a large sample (nearly 80,000) of offspring. By this, we mean that there is no detectable radiation-related increase in congenital abnormalities, mortality (including childhood cancers), chromosome aberrations, or mutations in biochemically identifiable genes.

Unfortunately, the epidemiologic studies on the survivors who received low doses of radiation (in the range of 0.01 Sv to 0.2 Sv) are equivocal regarding good measures of the risk of long-term health effects. This is because, even though the statistical sample available in the survivor studies is very large (nearly 100,000 subjects in the Life Span Study), it can be shown that many, many more subjects would be needed to draw reasonable statistically valid inferences from the data. Thus the data at low doses have large error bars and can be fit to mathematical models that show a threshold, no threshold, reduced effect, and in some cases even a beneficial (protective) effect, depending on the model one picks. There is no model that seems to be more valid than the others. Therefore, the consensus of the community of scientists interested in the A-bomb, as well as other, radiation studies seems to be that epidemiologic studies do not have the statistical power to give us answers to the low-dose questions. This issue is thoroughly discussed in the book by William J. Schull.
John D. Zimbrick, Ph.D. School of Health Sciences Purdue Univerity

Treatment of victims of nuclear bombs depends on how close they were to the hypocenter and numerous other factors. Those in close proximity were killed acutely by blast and heat, and no treatment was possible. Those a little farther away, who survived these effects, suffered from acute radiation syndromes and became quite ill within hours to days. The duration of the latent period is inversely proportional to radiation dose, that is, proximity to the hypocenter. In Japan most of these received little or no treatment. The problem was the massive number of casualties in this class and the lack of knowledge of the medical personnel. In cases of nuclear accidents (for example, Chernobyl) the subjects who got doses greater than 10-12 Gy received supportive care only (nutrition, fluids, narcotics for pain, etc.) because their radiation injuries were universally fatal. Those in the 8-10 Gy range could benefit from marrow transplants. Those below 8 Gy would probably survive with supportive care. Exposed individuals who survived the acute effects, however, were later found to suffer increased incidence of cancer of essentially all organs. The cancers occurred years to decades later. Excess cancers are still being detected in this population, now more than 50 years after the bombing. Excess cancer means that these individuals are more likely to get cancer than other Japanese. The cancers they get are in no way different from spontaneous cancer in other Japanese. Animal studies have detected genetic effects from these sublethal doses: mutations that occur in offspring, perhaps several generations later. No such effects have been detected in offspring of Japanese survivors. However, most mutations are recessive and require several generations to detect. The second generation of offspring of the Japanese is just now appearing.