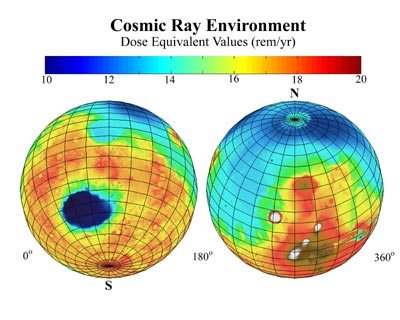 This global map of Mars shows the estimated radiation dosages from cosmic rays reaching the surface, a serious health concern for any future human exploration of the planet.

The estimates are based on cosmic-radiation measurements by the Mars radiation environment experiment, an instrument on NASA’s Mars 2001 Odyssey spacecraft, plus information about Mars’ surface elevations from the laser altimeter instrument on NASA’s Mars Global Surveyor. The areas of Mars expected to have the lowest levels of cosmic radiation are where the elevation is lowest, because those areas have more atmosphere above them to block out some of the radiation. Earth’s thick atmosphere shields us from most cosmic radiation, but Mars has a much thinner atmosphere than we have on Earth.

The colors in the map refer to the estimated annual dose equivalent in rems, a unit of radiation dose. The range is generally from 10 rems (color-coded dark blue) to 20 rems (color coded dark red). Radiation exposure for astronauts on the International Space Station in Earth orbit is typically equivalent to an annualized rate of 20 to 40 rems.

NASA’s Jet Propulsion Laboratory, Pasadena, Calif. manages the 2001 Mars Odyssey and Mars Global Surveyor missions for NASA’s Office of Space Science, Washington D.C. The Mars radiation environment experiment was developed by NASA’s Johnson Space Center, Houston. Lockheed Martin Astronautics, Denver, is the prime contractor for Odyssey, and developed and built the orbiter. Mission operations are conducted jointly from Lockheed Martin and from JPL, a division of the California Institute of Technology in Pasadena.