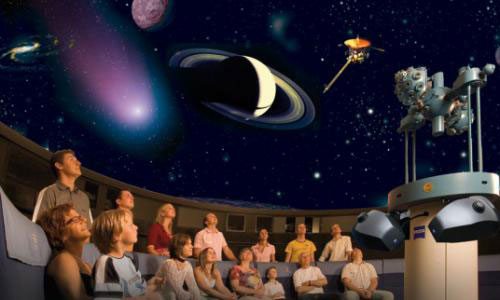 Space weather is a term that scientists use to describe the violent changes in energy and magnetism on the solar surface, and how these changes travel through the solar system to affect the Earth and other planets.

The Sun gives off a very strong wind from its outer layers, and this wind flows past Mercury, Venus and the rest of the planets in the solar system. In fact, you can even say that Earth goes around the Sun while still being INSIDE the atmosphere of the Sun! But don’t worry. Even if you were in space you wouldn’t notice anything going on at all. This wind is billions of times thinner than any wind we feel on the ground.

The surface of the Sun is very complicated and full of very hot gases that are sometimes shot away from the Sun. Astronomers call one type of these events ‘Solar Flares’ and another kind ‘Coronal Mass Ejections’.

Solar flares are pretty spectacular! Within an hour or less, an area of the Sun the size of Earth suddenly lets loose a blast of X-rays and other powerful radiations. Traveling at the speed of light, which can go 7 times around Earth in only one second, it still takes 8 1/2 minutes for these X-rays to get to Earth from the Sun. During some of the most powerful solar flares, an astronaut in a spacesuit could actually get killed if he or she happened to be doing a spacewalk at the time. NASA, and astronomers, have been studying solar flares for over 50 years to learn more about what causes them, and to make it easier to forecast when the next one will happen so that astronauts won’t be injured by them accidentally.

Fortunately, the atmosphere of Earth is so thick that we never have to worry about even the most powerful solar flare here on the ground. The only thing that solar flares do is to knockout short-wave radio communication during the daytime. These blasts of X-rays damage a part of the atmosphere called the Ionosphere, and this lets radio signals from the ground get reflected like light is reflected from a mirror.

The second type of storm from the Sun is the Coronal Mass Ejection, also called the CME. For reasons that astronomers don’t fully understand yet, the sun occasionally ‘burps’ and send out huge clouds of gas into space. By the time they reach the orbit of Earth, they grow to be millions of miles across. Most of the time, these clouds are sent out in other directions than where Earth is in its orbit, but every few weeks they come charging right at us. They travel at about a million miles an hour and take 2-3 days to get here.

Now it just so happens that Earth has a pretty stiff magnetic field, and a very thick atmosphere, so we never have to worry about these solar storm clouds as they sweep by Earth on their way to Pluto and beyond. The Earth’s magnetic field, which looks kind of like a bar magnet, pushes most of the particles in these clouds away from us so they never really hit the planet at all. But even so, the CME material can make lots of trouble in other ways too.

In a region of the tail nearly halfway to the Moon, there are charged particles trapped in the magnetic field – mostly electrons and protons. When the field snaps, these particles pick up energy from the magnetic field, and they begin to move at very high speeds. Within a few minutes, they travel towards Earth along the magnetic field. They get funneled into the polar regions where they collide with atoms of oxygen and nitrogen. These collisions give off light and we se this from the ground as the famous aurora borealis and aurora australis – the northern and southern lights. People have worried about them for centuries, but they really are harmless. They can’t get any closer to the ground than 70 miles or so, but optical illusions can fool the eye into thinking they get much lower and even touch the ground!

If aurora were the only things that space weather causes, we wouldn’t have much to really worry about, but unfortunately it is not that simple. We rely on communications satellites, military satellites, and a reliable electrical service to power our computers, televisions, air conditioners and to run our industries. Space weather can knock out satellites and even cause blackouts!

In March 1989, the Canadian province of Quebec experienced a blackout that affected millions of people for a half a day. People were stuck in dark elevators; heating systems would not work to heat homes during the Canadian winter, and if it hadn’t been for a bit of old fashioned good luck, many states from Maine to Georgia would have had electrical problems too! What happened was that a huge solar storm caused currents to flow in the ground under Canada. These currents of electricity found their way into the Quebec electrical power system. In 90 seconds, the engineers went from normal operation to full blackout!

It isn’t just blackouts that can happen. The most common way that space weather affects us is by damaging or disrupting communications satellites. When was the last time you or your parents used a cell phone or a pager? When did you stop at a gas station and use your credit card at the pump to buy gas? Have you used the internet to visit web sites in Europe or elsewhere? Chances are pretty good that you or your family have relied on one or more satellites every day to handle your communications or other needs. These satellites are very expensive and they orbit Earth far enough out in space that they aren’t as well shielded from space weather storms as you and I are here on the ground. Since 1996, 14 satellites have been affected by space weather events and nearly $2 billion has been lost in satellite technology from some kind of space weather event.

Astronauts live and work in space on the Space Station, and even when they are inside, they get very high doses of radiation. In a few weeks they can get 30 times more radiation exposure than what we get here on the ground in a whole year! Many adults worry about going to the doctor to get a chest X-ray. Astronauts get more radiation in one week than what your parent would get from 100 chest X-rays!

You don’t have to be an astronaut to get zapped, either. If you plan to be an airline pilot or a stewardess, you will fly at altitudes of 40,000 feet for perhaps 900 hours every year. During a large solar flare, a passenger on a long flight could pick up as much radiation as in a chest X-ray. The flight crew, during a 900-hour tour of duty, would get exposed to much more than that, and in fact more radiation than what we allow for nuclear power plant operators!

So, space weather has many parts to it, and you don’t have to be an astronaut to worry about storms from the sun!

https://spaceplace.nasa.gov/spaceweather/en/ – what is space weather?

https://www.space.com/21121-solar-flares-causes-classification.html – what are solar flares?