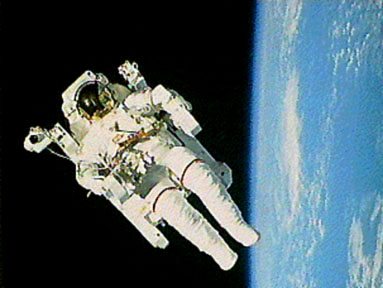 The space weather story can also be told through excerpts from various TV programs from NASA provided courtesy of:

CONNECT ‘Having a Solar Blast’ and ‘Dancing in the Night Sky’

SciFiles “The Case of the Technical Knockout” Episode 504

Below are some of the more interesting interviews.

The Ring Current – Dr. Odenwald describes how the IMAGE satellite has mapped the changing features of the ring current. This region was predicted to exist over 70 years ago, but never actually ‘photographed’ until recently. [MPEG, 4.8 Mby]

The Plasmasphere – Dr. Odenwald describes how the IMAGE satellite has ‘photographed’ the upper atmosphere region known as the plasmasphere. [MPEG, 4.4 Mby]

The Aurora I – Dr. Odenwald describes how the IMAGE satellite captures movie-like views of the evolution of the aurora from an orbiting satellite. Excerpted from the 2003 NASA/CONNECT program ‘Having a Solar Blast’. [MPEG, 2.9 Mby]

The Aurora II – Nasa/CONNECT Jennifer Pulley reviews the scientific story of how aurora are produced. Excerpted from the 2003 NASA/CONNECT program ‘Having a Solar Blast’. [MPEG, 6.6 Mby]

Aurora History – Dr. Odenwald describes how Norwegian physicist Birkeland tried to simulate aurora with a ‘terrella’ and proposed currents from the sun as the causes of aurora. Excerpted from the 2003 NASA/CONNECT program ‘Having a Solar Blast’. [MPEG, 9.2 Mby]

Human Impacts – Dr. Odenwald summarizes how solar storms have impacted us in the past, and which of our technological resources are the most vulnerable. [MPEG, 4.3 Mby]

The Sun-Earth Viewer. If you click on the ‘Interviews’ link, scientists Dr. Arthur Poland, Dr. Sten Odenwald and Dr. Nicola Fox answer prerecorded questions about solar storms, space weather and their human impacts in a series of 1-2 minute programs.

Live from the Aurora. These programs were created by Passport to Knowledge, and include archived webcasts of scientists discussing aurora and the sun.