The 23rd Cycle: Learning to Live with a Stormy Star 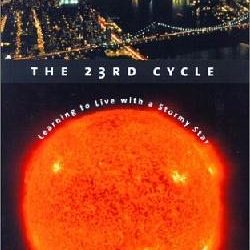 My book on space weather The 23rd Cycle:Learning to live with a stormy star though now out of print, contains a thorough description of this topic for the general public. I have decided to make the entire book available at this site and searchable too! I have also included PDF versions of each chapter so you can read your favorite ones off-line and notate the margins to your hearts content! All the relevant illustrations, movies and animations for this book can be found by clicking the Media button on the top tool bar.

These web documents are available for the Space Weather search engine to take you to specific parts via your keyword search. Please download a copy of the B/W PDF file which has been formatted to be much more readable! I have also added a large, left-hand margin to make it easier for you to make notes.

The 23rd Cycle: Learning to live with a stormy star

Introduction For over 150 years, telescopic views of the sun’s surface have revealed a rhythmic rise and fall in the number of sunspots. Each cycle lasts about 11 years, and in-step with this, scientists have found many other things that keep a rough cadence with it. The Northern and Southern Lights (aurora) are more common during sunspot maximum than minimum. Titanic solar flares brighter than a million hydrogen bombs also come and go with this cycle. But there is a darker side to these events. Solar flares can kill, aurora can cause blackouts, and satellites can literally be forced out of the sky. [More] [PDF]

Chapter 1: A Conflagration of Storms Although no one can say for sure how current trends in thinking are going to play themselves out in the next 5-10 years, the evidence for how we have already been affected in the past is well documented. It all comes down to the simple fact that the Sun is not the most polite and well-behaved neighbor we would like to imagine it to be. Not only do we find ourselves between a rock and a hard place, but also we can not even tell when the next blow is likely to fall. There is no great mystery about what is going on. We have had a long history, spanning a century, of calamities spawned by solar disturbances. [More] [PDF]

Chapter 2: Dancing in the Light Like the settlers to Kansas who discovered tornadoes for the first time, we have quietly, but steadily, entered an age where aurora and solar storms have become more than just a lovely but rare nighttime spectacle. During the last century, new technologies have emerged such as telegraphy, radio and satellite communication – and all of these modern wonders of engineering have shown consistent patterns of vulnerability to these otherwise rare and distant phenomena. The most serious disruptions have followed relentlessly the rise and fall of the sunspot cycle and the appearance of ‘Great Aurora’ which arrive every 10 years or so, and are often seen worldwide. Like tornadoes, we have had to reach a certain stage in our colonizing the right niches in order to place ourselves in harms way. Aurora are only the most obvious sign that more complex and invisible phenomena are steadily ratcheting up their activity on the distant solar surface, and in the outskirts of the atmosphere high above our heads. When great auroral storms are brewing, they inevitably lead to impacts on our technology that can be every bit as troublesome potentially deadly as an unexpected lightning storm, or a tornado. [More] [PDF]

Chapter 3: Hello? Is anyone there? Because aurora, and the powerful electromagnetic forces that cause them, have a strong affinity for all things electrical, it is not surprising in retrospect, that every communications technology we have erected in the last 160 years has fallen victim to interference from these natural events. [More] [PDF]

Chapter 4: Between a Rock and a Hard Place Because of the increasing of electrical demand over the last decade, and the insufficiency of communities to build new power plants, North American citizens have created a potentially unstable balance between supply and demand. In 1998, for example, the peak power demand was 648,694 megawatts, compared to the 737,855 megawatts that was available in actual power plant capacity, a margin of only 16%. A decade earlier, this margin was substantially higher. The NAERC has found that we are rapidly reaching a critical condition: The amount of available electrical capacity in excess of peak demand will shrink from 19% during peak summer load conditions in 1995 to 10% by 2004. [More] [PDF]

Chapter 5: “We’re not in Kansas anymore!” Magnetic compasses are not the only things that seem to need the magnetic field as a stable reference in time and space. There are many other ‘systems’ on the Earth that need to sense their direction to get to food, shelter, or simply to maintain equilibrium in a thousand other ways. The geomagnetic field is so subtle you can’t feel its presence outright. But somehow, over millions of years, it seems that organic evolution has managed to detect this force by trial and error, and incorporate it into the guidance systems of everything from bacteria to sharks. Even the common Monarch butterfly relies on a magnetic sense to orient itself on its annual southward migration to Mexico. [More] [PDF]

Chapter 6: They Call Them ‘Satellite Anomalies’ Finding additional examples of satellites that have suffered from serious damage is complicated by the fact that commercial satellite companies do not want it widely known what the cause of a satellite problem was. The military, on the other hand, considers this kind of satellite vulnerability information a sensitive issue. Although the military satellite impacts are inaccessible, it is possible to ferret-out from news reports and from a variety of published trade journals, many examples of satellite problems caused by, or likely to have been caused by, solar storm events. [More] [PDF]

Chapter 7: Business As Usual When the Galaxy IV satellite ceased operating on May 19, 1997, 40 million pager owners woke up the next day to discover that their high-tech devices had turned into useless pieces of plastic. When they got into their cars and tried to pump gas at the local gas station, the pumps rejected their credit cards because they were unable to use the satellite to transmit and receive verification codes. 100,000 privately-owned, satellite dish systems across North America had to be repointed at a cost of $100 each. [More] [PDF]

Chapter 8: Human Factors At 1:20 AM Eastern Daylight Time on August 4, 1972, the Sun let-loose one of the most powerful blasts of radiation ever recorded during the Space Age. The streams of X-rays and high-energy protons that flowed past the Earth within minutes, but not before triggering a major geomagnetic disturbance disrupting telephone service, and destroying a power transformer at the British Columbia Hydro and Power Authority. Although ground-based observers were kept on their toes by the unexpected power and communication outages, the event would have had a much more deadly outcome had it arrived four months later between December 7-19 while Apollo 17 astronauts were outside their spacecraft playing golf. Within a few hours, some estimates suggest that Harrison Schmidt and Eugene Cernan would have been hit by an incredible blast of radiation well over 1000 rem. The astronauts would have suffered acute radiation sickness by the time they reached their Lunar Ascent Module, and probably even died some time later back on Earth. [More] [PDF]

Chapter 9: Cycle 23 Our Sun traces a dependable path across our skies every day, yet only very recently have we discovered that it has its share of stormy days. For the last three centuries, solar activity levels have come and gone in a roughly 11-year pulse beat that we have actually grown to expect. Even our biosphere shows the unmistakable traces of these cycles resonating in everything from carbon-14 abundances in tree rings, to global precipitation patterns and coral layering. [More] [PDF]

Chapter 10: The Future The main problem that opposes the further development of newer space weather forecasting techniques is that the data is too sparse to follow all of the changes that can have adverse impacts. Research satellites are launched and put into service on the basis of scientific needs, not on the basis of their utility to space weather forecasting. Even if we had a fully working armada of satellites keeping a watch on the entire system, this would still not be sufficient to provide detailed forecasts. [More] [PDF]

Epilog: But for now, for this year, for this Cycle, we must remain vigilant even in the face of what seems like little cause for outright concern. For every pager that is temporarily silenced, others will work just fine. For every city that is darkened or loses air conditioning, a hundred others will experience just another ordinary day. Space weather is like a shark whose fin we see gliding across interplanetary waters. We know it is there, but we haven’t completely figured out what to do when it strikes. [More] [PDF]

Appendix and Notes for The 23rd Cycle [PDF]

Bibliography for The 23rd Cycle [PDF]