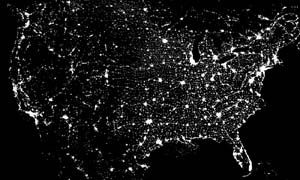 Electrical power blackouts and ‘sags’ cost the US about $80 billion every year in lost services, industrial capacity and Gross Domestic Product. Blackouts caused by space weather events are potentially more devastating than a major hurricane landfall. The space weather ‘Storm of the Century’ could cause hardships more severe than anything we have thus far experienced.

Congressional Testimony – On October 30, 2003 the House of Representatives, Subcommittee on Environment, Technology and Standards convened a session ‘What is Space Weather and who should forecast it?’. The following is an excerpt of the testimony by John Kappenman, Manager, Applied Power Systems, Metatech Corporation:

” Some of the first reports of operational impacts to power systems date back to the early 1940’s and the level of impacts have been progressively become more frequent and significant as growth and development of technology has occurred in this infrastructure. In more contemporary times, major power system impacts in the U.S. have occurred in storms in 1957, 1958, 1968, 1970, 1972, 1974, 1979, 1982, 1983, and 1989 and several times in 1991. Smaller scale impacts can and do occur even more frequently; these include anomalous operating events that may result in the unexpected tripping of a key element of the system or even permanent damage to apparatus such as large power transformers…

The most important of these impacts was the storm-caused chain of events resulted in the blackout of the Hydro-Quebec power system. At 2:42 am EST, all operations across Quebec, Canada were normal. At 2:43 am EST, a large impulse in the Earth’s magnetic field erupted along the U.S./ Canadian border. GICs immediately started to flow in the southern portions of the Hydro-Quebec grid. In reaction to the GIC, voltage on the network began to sag as the storm increased in magnitude; automatic voltage compensating devices in the network rapidly turned “on” to correct this voltage imbalance. Unfortunately these compensators themselves were vulnerable to the harmonics generated in the network’s transformers, and mis-operation of relays to protect these devices caused the entire fleet of 7 compensators on the network to shut down within 60 seconds of the beginning of the storm impulse. When the compensators shut down, the network collapse followed within a matter of seconds, putting over 6 million inhabitants of the province in the dark. Going from normal conditions to a complete province-wide blackout occurred in an elapsed time of just 90 seconds. The power system operators had no time to understand what was happening, let alone to take any meaningful human action to intervene and save the grid…

While power grid reliability concerns are of paramount importance, the long duration of the storm and associated GICs in transformers on the network caused internal transformer heating to the point of failure. There were several noteworthy cases of transformer internal heating associated with the March 13, 1989 storm in the U.S. mid- Atlantic Region. In one case at the Salem Nuclear plant in southern New Jersey, the internal heating was so severe that complete failure of the transformer resulted…

However, just empirical evidence alone suggests that power grids in North America that were challenged to collapse for storms of 400 to 600 nT/min over a decade ago, are not likely to survive the plausible but rare disturbances of 2000 to 5000 nT/min that long-term observational evidence indicates have occurred before and therefore may be likely to occur again…

All mass transit systems shutdown as they depend on electricity for many of their functions. Traffic signal systems on most major streets and highways stopped and as a result most major thoroughfares became the equivalent of 8 lane parking lots in the early hours of the blackout. Only a few major power facilities are continuously manned, and since blackouts are possible at any hour, the odds are that 75 percent of the time the normal utility day crews are not on the job when these events occur. Attempting to recall workers that are trapped on the wrong side of these transportation snares is highly problematic…

Because of the possible large geographic laydown of a severe storm event and resulting power grid collapse, the ability to provide meaningful emergency aid and response to an impacted population that may be in excess of 100 million people will be a difficult challenge. Potable water and replenishment of foods may need to come from boundary regions that are unaffected and these unaffected regions could be very remote to portions of the impacted U.S. population centers. As previously suggested adverse terrestrial weather conditions could cause further complications in restoration and resupply logistics.”

Lawrence Berkeley Labs Study, In 2005, Kristina Hamachi-LaCommare and Joe Eto for the U.S. Department of Energys Office of Electric Transmission and Distribution completed a study of the costs to the US from a variety of chronic electrical ‘sags’ and short-term losses of service. – “The study estimates the total cost to the U.S. of power interruptions at about $80 billion per year. Of this, $57 billion (73 percent) is from losses in the commercial sector and $20 billion (25 percent) in the industrial sector. The reason for the commercial sectors high share of these cost is the large number of commercial sector customers, which includes small as well as large businesses, and the high cost per outage per customer,

August 14, 2003 Blackout – ICF Consulting produced an assessment of the economic impact of this recent electrical blackout that affected 50 million people in 8 states . “Specifically, for this analysis, we assume that the initial outage of 61,800 MW lasted for 4 hours and then half of that was restored, with the other half (30,900 MW) being the shortfall for another 10 hours. Given that the next announcement from NERC was issued approximately 18 hours after the start of the outage, we assume that another one-half of the unserved 30,900 MW was restored after 14 hours and the remaining loss of 15,450 MW lasted for the subsequent 4 hours. This gives a total of 18 hours for the first phase of the blackout. Using similar arguments for the remaining period of the blackout, we assume more than 13,000 MW of customer load was lost for another 14 hours after which 6,600 MW was the shortfall for another 10 hours. Finally, on the third day of this blackout, 2,000 MW was the loss for 20 hours and another 1,000 MW was the shortfall for the final 10 hours of this blackout. This gives a total outage period of 72 hours. Using this scenario and the average electricity price for the affected region from August 2002, the economic cost of this outage is estimated to be between $7 and $10 billion for the national economy. ”

Investigation of August 2003 Blackout – The North American Energy Reliability Council conducted an investigation of how the blackout happened, and its detailed impacts. A space weather storm would share many elements in common with this event, except that the electrical equipment damage would be far more wide spread. Their findings are summarized in Section 5 of this document.

The following blackouts are not known to have been caused by space weather:

September 23, 2002, – A massive power failure disrupted central Chile, including the capital city of Santiago. Some 3,500 passengers had to be rescued from stalled Metro trains in Santiago.

August 6, 2003 – Buenos Aires was hit again by another sudden blackout . Power company officials blamed that outage on the collapse of three power lines

August 18, 2003 – 4.5 million people in Georgia lost electricity; the Tblisi metro ground to a halt and the water supply was cut off.

August 23, 2003 – Finland’s capital Helsinki and suburbs, including the international airport at Vantaa, were blacked out. Saturday evening’s revelers at Helsinki’s Linnanmäki amusement park had to be rescued when the blackout left them dangling in rides in midair. Even Radio Suomi, which relies on emergency generators, went off the air when both its generators and backup battery power failed.

August 28, 2003 – the BBC reported that at the height of London’s evening rush hour, a massive power outage struck the city and southeast England. 1800 trains stopped, including 60 percent of the London Underground, an event that Britain’s Network Rail called “unprecedented.”

September 1, 2003 – At 10 o’clock the city and five other Malaysian states were struck by a massive blackout. Workers in the Petronas Towers, the world’s tallest buildings, were trapped in elevators and with signal lights out, traffic in downtown Kuala Lumpur ground to a virtual halt.

September 2, 2003 – Cancun, Mexico, which was swarming with tourists and advance teams for the following week’s World Trade Organization meeting, also found itself plunged into a blackout. The power failure struck Quintana Roo state on the Yucatan peninsula and two neighboring states. Power was out for six hours and affected 3 million people.

September 23, 2003 – Eastern Denmark and southern Sweden, including the cities of Copenhagen and Malmo, lost power in what was described as a “very unusual” blackout. Four million people were affected, including passengers stranded on board trains and at Copenhagen’s busy international airport. Factories on the island of Zealand and in southern Sweden stopped production and the Oresund Bridge linking Denmark to Sweden was closed to traffic. [International Herald Tribune]

September 28, 2003, – A massive power failure struck Italy, leaving 57 million people without electricity. A simultaneous blackout plunged Geneva, Switzerland, into darkness. The blackout cut off electricity to Vatican City and Pope John Paul II had to rely on emergency generators to power amplifiers in order to deliver his Sunday sermon. Thirty-thousand passengers were stranded on trains throughout the country. The blackout was later blamed on a tree hitting a high voltage transmission line in Switzerland.