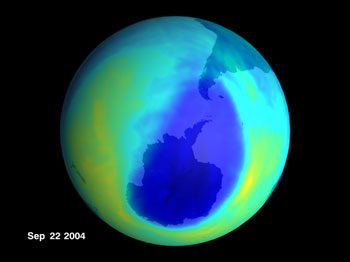 The ozone layer is located 50 kilometers above the ground. Most of the solar ultraviolet light is absorbed by the ozone molecules, which temporarily break up when the ultraviolet light photons collide with them. On September 22, 2004, ozone thinning over Antarctica reached its maximum extent for the year at 24.2 million square kilometers (9.4 million square miles). The largest maximum area on record was 29.2 million square kilometers, in 2000. On October 5, 2004 the ozone layer reached a low value of 99 Dobson Units. Data come from NASA’s Total Ozone Mapping Spectrometer (TOMS) on the Earth Probe satellite, from Aug. 1 – Oct. 5, 2004.

The amount of UV from the sun ( specifically UV-B) changes during the sunspot cycle. At sunspot maximum, there is 0.1 % more UV-B radiation than at minimum. Scientists have detected this sunspot cycle-effect in a 2% change in ozone concentrations. For more details see ” Solar Cycle Variability, Ozone, and Climate” by Drew Shindell, David Rind, Nambeth Balachandran, Judith Lean, and Patrick Lonergan in journal Science 1999 284: 305-308.

The difference in total ozone between maximum and minimum conditions during the sunspot cycle were estimated using yearly averages of total ozone. For solar cycle 21, 1.16% and 1.26% for solar cycle 22, a larger difference of 3.8% and 4.1% were found. The corresponding variation in UV-B at 3000 Angstroms, using Beer’s law, is 4-10% with maxima occurring during the minimum of the solar cycle. E. Escher, V. Kirchoff, Y. Sahai and N. Paes Leme published in the Advances in Space Research, Volume 27, Issue 12, p. 1983-1986.

“The correlations between the total column ozone observed by TOMS and the 11-yr sunspot cycle are lowest in the equatorial region, where ozone is produced, and in the subpolar regions, where the largest amounts are found. In the annual mean the highest, statistically significant, correlations lie between the 5° and 30° parallels of latitude in either hemisphere — between the area of production and the areas of plenty. This position of the largest correlations suggests that the association between the Sun and the ozone is not a direct, radiative one, but that it is due to solar induced changes in the transport of ozone, that is, to changes in the atmospheric circulation. The highest tropical-subtropical correlations move with the Sun from summer hemisphere to summer hemisphere. The subtropical geopotential heights in the ozone layer are higher in the peaks than in the valleys of the 11-yr sunspot cycle. It is probable that the higher subtropical geopotentials in solar maxima depress the poleward transport of ozone through the subtropics and therefore create an abundance of ozone in the tropics relative to the solar minima. These results are based on a 15-yr series of ozone observations and may thus not necessarily be representative of a longer period. ” K. Labitzke and H. van Loon published in the Journal of Atmospheric and Solar-Terrestrial Physics V. 59, p. 9-19, 1997

There is still some controvercy over these results and their significance.