What’s Driving Climate Change in the 20th Century – Changes in Solar Radiation or the Buildup of Greenhouse Gases? 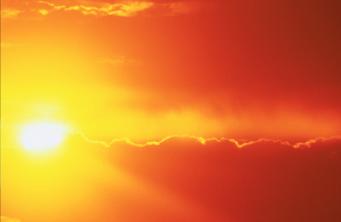 The Role of the Sun in Climate Change
The Sun has long been a reliable source of the radiant energy for the Earth. But this radiation, which helps determine our fundamental climate state and enables habitability, is not constant. Changes in solar radiation must therefore, be considered as a possible cause of climate change, among a number of other possible causes.

Space-based measurements reveal the existence of 11-year cycles in solar radiation upon which are often superimposed larger, short-term changes with 27-day cycles. Unfortunately, direct observations of variations in solar irradiance exist, thus far, only for the last 20 years, which is a very short record in terms of climatological time scales. Indirect “proxies” of solar activity (from tree-rings and ice-cores) exhibit 11-year solar cycles as well as longer-term changes or cycles that exceed the amplitudes of their 11-year cycles. Comparisons of these proxy records with direct observations suggest that present levels of solar irradiance are probably increased relative to periods of anomalously low solar activity commonly known as the “Dalton”, “Maunder” and “Sporer Minima” (which occurred from 1790 to 1820, from 1645 to 1715 and from 1425 to 1575, respectively). During the first half of the twentieth century, solar activity increased steadily, but since about 1950 the activity underlying the 11-year cycles has been essentially constant exhibiting little or no change. The Sun’s radiation is expected to track trends in solar activity but the true amplitudes (a measure of the energy output of the sun) of long-term irradiance changes can only speculated because of the lack of a sufficiently long database of direct observations. During the past two decades (since 1978), for which direct observations do exist, there is little evidence for an underlying upward trend in the Sun’s radiation, although the existence of an 11-year solar cycle is apparent.

An array of empirical sun-climate relationships imply a consequential role for the Sun in climate change. Climate parameters of many types often exhibit cycles that are also common in solar activity proxies, such as near 11-, 22-, 80 and 210-years. Times of cooler climate in past millennia usually coincide with reduced levels of solar activity. During the Little Ice Age, which occurred from about 1450 to 1850, surface temperatures were from 0.6°C to 1°C colder than at present (depending on geographic location, as changes in solar radiation can often result in regional or local responses as opposed to leaving a global signature). Solar activity was lower than at present because of the occurrence of the Dalton, Maunder and Sporer Minima. The speculated decrease of overall levels of solar radiation in 1650 from present levels comprises a climate forcing of 0.6 Wm-2 (but with large uncertainties such that the range is from 0.2 to 1.2 Wm-2). For comparison, the change in greenhouse gases since 1650 corresponds to a climate forcing of about 2.5 Wm-2, 95% of which has occurred since 1850. In the pre-industrial period prior to the Little Ice Age–during the 12th-13th centuries (the Medieval Warm Period) –warmer surface temperatures coincided with higher levels of solar activity (which again, could have manifested itself regionally).

Climate models with realistic sensitivities simulate surface temperature changes of a few tenths of a degree C in response to plausible climate forcing due to changes in solar radiation over the past few hundred years. The simulations can account for two hundred years of surface temperature fluctuations prior to the industrial epoch (from 1600-1800). The solar-related warming in response to a solar forcing of 0.6 Wm-2 (from 1650 to the present) is calculated globally to be 0.45°C, but with strong regional signatures. Less than 0.25°C of this warming occurs from 1900-1990 when, for comparison, measured surface temperatures over this same period of time increased 0.6°C. In suggesting that the Sun’s variability accounts for less than half the 0.6°C surface warming in the industrial period, the climate change model simulations are in good agreement with the pre-industrial empirical Sun-climate associations. A larger role for the Sun in explaining the observed climate warming over the twentieth century, is inconsistent with direct measurements of solar output, and with proxy evidence of solar variability during the pre-industrial era.

During the past two decades (1976-1996) direct observations of solar irradiance suggest negligible long-term solar forcing of climate. Over this observational period, solar radiation levels remained approximately constant, exhibiting no change during two successive solar cycle minima (1986 and 1996) while observed surface temperatures nevertheless increased by 0.2°C over the same period of time. Of course, even in the absence of long-term trends, climate variability may be associated with the 11-year irradiance cycle in ways implied by empirical associations, but not presently understood or accounted for in climate models.

Solar activity is presently at high levels relative to the historical record of the past 8,000 years. This suggests that future levels of solar radiation will probably be comparable to or less than present levels, and that future solar forcing will either be small, or negative relative to the climate forcing due to greenhouse gases, while projected concentrations of greenhouse gases continue to increase. Furthermore, solar activity levels during the past 8,000 years have ranged, typically, from low levels similar to the “Maunder Minimum” (a period of low solar irradiance circa 1650) to higher levels, on a par with the present. A warming on the order of 0.5°C that present scientific understanding and analyses attribute to this increase in solar forcing since 1650, possibly represents an upper limit to the observed surface temperature change attributable to solar radiation. Were solar activity to undergo another “Maunder Minimum” type event over the next 200 years, surface cooling would likely be 0.5°C or less, as a result. However, projections of future solar activity are exceedingly difficult for even one 11-year solar cycle, and are essentially impossible for the long-term. Ultimately, a more refined determination of the Sun’s role in climate change requires a much longer record of measurements of solar radiation than the present meager 20-year database. Continuous, precise solar monitoring is crucial for the indefinite future. Improved understanding of the processes by which solar radiation interacts with the Earth is similarly essential to better specify climate’s response to direct solar forcing of climate by fluctuations in solar radiation, and indirect solar forcing of climate via solar-related changes in atmospheric ozone.

The Role of Greenhouse Gases in Climate Change

Identifying and evaluating possible causes for the observed warming of earth’s climate over the 20th century are matters of considerable importance because of the need for policy-makers and decision-makers, in general, to evaluate the credibility of the models being used to calculate future climate change due to “greenhouse” gases being added to the atmosphere. A series of model calculations were used to examine the differing effects of natural variability, carbon dioxide and other greenhouse gases, sulfate particles, and changing solar output, on the climate of the 20th century. In general, these calculations make it clear that it is scientifically very difficult to construct an explanation for the 20th century warming that does not include a major role for the added greenhouse gases resulting from human activities.

Based on the above calculations, and the observational records of climate change for the 20th century, the following conclusions are drawn:

Dr. Judith Lean is a Research physicist in the Space Science Division of the Naval Research Laboratory in Washington, DC, where she has been since 1988. Her research is focused on the mechanisms and measurements of variations in the Sun’s radiative output at all wavelengths, and the effects of this variability on the Earth’s global climate and space weather. Dr. Lean has been extensively involved in the Upper Atmosphere Research Satellite (UARS) program presently monitoring solar radiation, and is also involved in the Solar Radiation and Climate Experiment (SORCE) scheduled to commence high precision monitoring of solar radiation in 2002. She has worked closely with Dr. David Rind of NASA to better understand solar-induced climate forcing of the Earth’s climate system relative to the influences of greenhouse gases and ozone depletion.

Dr. Lean has published over 60 peer-reviewed scientific papers and over 20 conference proceedings in the scientific literature, and has given more than 170 presentations at scientific meetings, seminars, colloquia and lectures. As one of the leading authorities on solar radiation and its influence on the Earth’s climate, she has been widely quoted over the past decade by magazines and newspapers such as Science, Science Impact Newsletter, New Scientist, Newsweek, Space News, Earth, the New York Times, and the National Public Radio.

She has served as Chair of the National Academy of Sciences’ (NAS) Working Group on Solar Influences on Global Change, and as a member of NAS’s Task Group on Ground-Based Solar Research. She has also served on various NASA (National Aeronautics and Space Administration), NSF (National Science Foundation), and NPOESS (National Polar Orbiting Operational Environmental Satellite System) panels, committees and working groups.

She is a member of the American Geophysical Union, the International Association of Geomagnetism and Aeronomy, the American Astronomical Society, and the Solar Physics Division of the American Meteorological Society. Dr. Lean has also testified before Congress on the role of solar radiation and solar variation in climate change. She received her Ph.D. in Atmospheric Physics in 1981, from the University of Adelaide, Australia.

Dr. Jerry D. Mahlman is the Director of the National Oceanic and Atmospheric Administration’s Geophysical Fluid Dynamics Laboratory – one of the world’s leading climate modeling centers. He also holds a Professorship in Atmospheric and Oceanic Sciences at Princeton University. His research career has been directed at modeling, diagnosing, and understanding the behavior of the atmosphere and its implications for climate and chemical change. Over the past decade, he has occupied a central role in the interpretation of human-caused climate change to policy-makers and communities. Dr. Mahlman served as the Chair of the Scientific Advisory Committee of NASA’s Mission to Planet Earth, is a member of the National Research Council’s Board on Sustainable Development, was the US Representative to the World Climate Research Programme, and was a member of NASA’s Advisory Council. From 1989-1991, Dr. Mahlman served as a member of the US-USSR Joint National Academy of Sciences Committee on Global Ecology. He is a Fellow of the American Geophysical Union and of the American Meteorological Society, and has received the Department of Commerce Gold Medal, the Presidential Distinguished Rank Award, the American Meteorological Society’s Carl-Gustaf Rossby Research Medal, and an Honorary Alumnus Award from Colorado State University.