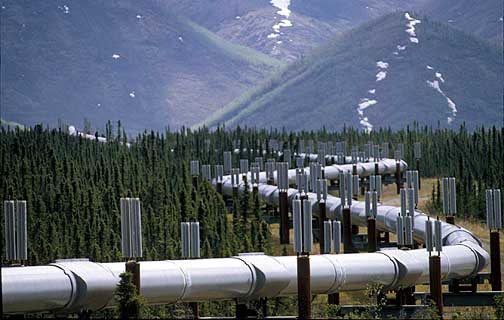 Gas pipelines extending east to west can pick up currents in the ground produced by geomagnetic storms. These currents cause the normal corrosion of pipelines to be accelerated. Over many years, this space weather effect can be significant.

In Finland, geomagnetically-induced currents (GICs) are taken very seriously. You can examine the real-time gas pipeline changes at the Finnish Meteorological Institute website.

The 23rd Cycle – Chapter 8 – The Alaskan pipeline extends over 800 miles in a north-south direction, and its central 1/3 runs along the latitude of the auroral electrojet current. It was built during the 1970’s and specifically designed to minimize these currents. Modern pipelines are protected from long-term current flows by a weak counter current of a few amperes which is applied so that the pipeline has a net, negative potential relative to ground. The problem is that auroral currents change polarity in minutes, rendering this ‘cathodic protection’ useless. During geomagnetic storms when the electrojet current flows erratically, currents as high as 1000 amperes have been detected. The lifetime of the Alaskan pipeline is now estimated to be many years shorter than originally planned. At that time, perhaps a decade from now, we will undoubtedly hear more about aggressive last-ditch countermeasures being employed to plug leaks, or replace whole sections of the pipeline. Some of these problems may arrive sooner than later. In 1990, plans to increase the pressure in the Alaskan pipeline had to await the results from a detailed federal investigation of the pipeline’s corrosion. Although investigators turned up evidence of gross negligence on the part of the pipeline inspectors, they gave the project a clean bill of health and allowed the higher pressures to be used. Meanwhile, pipeline engineers in Finland have been monitoring GIC currents in their lines for over a decade and are far more concerned about what the future may bring. According to a report on space weather impacts by the French national space agency, CNES, the long-term impacts of these currents can be substantial. Pipelines designed to last 50 years can suffer wall erosion of 10% in only 15 years unless the pipeline is regularly monitored and upgraded. No one seriously expects another devastating explosion such as the one in the Urals from any, currently active, pipeline. At worst, GICs will enhance the rate of corrosion in certain pipelines in high-latitude countries which will require careful inspection.”

US Department of Transportation Gas Pipeline Safety – Provides an extensive summary of statistics about the US pipeline resource. There are 160,000 miles of liquid natural gas pipeline. In 2004 there were 36 accidents involving corrosion, costing $15.7 million.

Canada Office of Critical Infrastructure Preparedness – From their 2002 Threat Analysis summary: “Pipelines that have insulating flanges can be more vulnerable to damaging electric currents. The flanges are meant to interrupt current flow; however, it has been discovered that the flanges create an additional site where the electric potential can build up and force the current flow to ground. The flanges lead to an increased risk for corrosion. The length of the pipeline also adds to its vulnerability due to the increased potential for corrosion. The geomagnetic dimension of corrosion protection design and the monitoring of pipelines is being recognized as a topic that requires immediate attention. Canadian pipeline operators were among the first to recognize that geomagnetic storms negatively affect pipelines and are world leaders in the design of systems that mitigate possible impacts. Mitigation activities include simulating electric currents in pipeline networks and pre-designing corrosion protection systems that have the ability to properly deal with geomagnetic effects. This work, combined with frequent monitoring, can help to avoid the long-term cumulative effects of GICs on pipelines.”

Finnish Meteorological Institute – GICNow! resource provides a gas pipeline monitoring system that is used by the gas pipeline industry to warn of potential problems with GICs.

Corrosionsource.com – July 2001 – “Shoddy regulation of the 2.2 million-mile network of pipes moving oil, petroleum products and natural gas across the US has proved toxic to the environment and deadly to hundreds of people. Weaknesses in the inspection system and inaccuracies by the operators in reporting spills cost the pipeline industry many hundreds of millions of dollars – yet there is a reluctance to spend money on corrosion prevention and adequate maintenance that would help to avoid such disasters. It is reported that America’s sprawling oil and natural gas pipelines are leaking on the scale of a ruptured supertanker. They are fouling the environment and causing fires and explosions that have killed more than 200 people and injured more than 1,000 in the past decade. And the numbers are increasing steadily — from 161 serious incidents in 1989 to 222 in 1999. Yet the federal government relies on a small, underfunded and understaffed agency to police a powerful and wealthy industry. Together, the largest pipeline companies in America each year earn more than enough to run the agency that regulates them for a century. The Office of Pipeline Safety (OPS) has 55 inspectors and is budgeted for 107 full-time employees – one of the smallest units within the U.S. Department of Transportation, OPS has an operating budget of about $23 million. The agency has jurisdiction over more than 2 million miles of interstate, intrastate and local pipelines – enough to reach around the Earth 88 times – but it delegates inspection and regulation to state and local authorities for much of that infrastructure. OPS rarely imposes fines, even when a pipeline explosion leads to death. For decades, the agency hasn’t known the precise whereabouts of thousands of miles of pipelines under its jurisdiction. The lack of oversight comes at a critical juncture: The Bush administration’s call for increased energy production promises to put additional pressure on an aging pipeline infrastructure and an overwhelmed regulatory agency.”