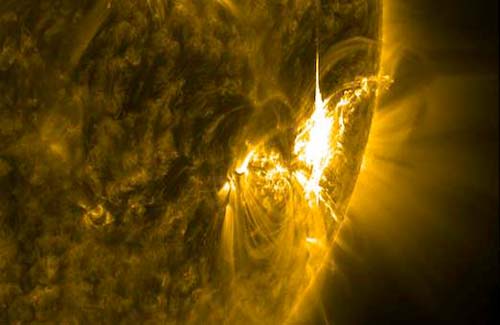 At 7:04 AM on May 15, the entire signal and switching system of the New York Central Railroad below 125th street was put out of operation, followed by a fire in the control tower at 57th Street and Park Avenue. Railroad officials formally assigned blame for a fire destroyed the Central New England Railroad station, to the aurora. Telegraph Operator Hatch said that he was actually driven away from his telegraph instrument by a flame that enveloped his switchboard and ignited the entire building at a loss of $6,000. Over seas, in Sweden a telephone station was ‘burned out’, and the storm interfered with telephone, telegraph and cable traffic over most of Europe. Aurora were visable in the Eastern United States, with additional reports from Pasadena California where the aurora reached zenith.

Visit RailwayPreservation.com for a virtual tour of streetcars and railways around the US.

Check out Cincinnati-Transit.net for an online visual guide to the railroads, highways, and bridges of Cincinnati.